September 20, 2017. I will remember this date for a long time. It was a little after 3am when communications started to fail due to heavy rain and wind. I sent txt messages to my closest friends and bf to let them know what was happening and that I didn’t know when I would be able to talk to them again.Hours later I was still taking glances outside my window watching tree branches, tv antennas and poles falling. By the time we could go out it was a disaster.

Hurricane Maria was a category 5 when it arrived to the island. It destroyed our power grid, more than 90% of our communications and we had no water service. No one was prepared for that kind of destruction even when we took the same measures we do every year: we get cash out of the ATM, we buy canned food, gas and water.

I spent the next few days helping around where I live. That’s something my dad instilled in us (my brother and I) since we were kids and I taught the same to my son. I work in a government agency that starts to work soon after this kind of event because we aid people in different ways and/or programs. We did our best since the beginning.

I have to say that it was heartbreaking to hear the stories and see pictures the first few days when I was assigned to work at a refuge. To see a wreckage where a house used to be. To hear people saying they only had the clothes they were wearing or that they only thing they were asking for was food. The second day a few of us were there with bags full of clothes because we didn’t know what else to do.

A week went by and you could see the panic in people’s faces. No electricity. No way of communicating with your loved ones to say you were ok or to find out if they were ok. No water. No money. People couldn’t use their EBT cards to buy food. If you needed gas you had to wait long hours in line and when we started running out of food… I had to go to another town to find a store and wait outside in long lines. We didn’t choose what to buy, we had to buy what was available at the price it was no matter how ridiculous.

That became the new normal. Government help was taking too much time and everyone was desperate. It wasn’t easy to see a family sitting outside of the disaster that looked to be their house before Maria. All I could do was work hard to help people and wait. A lot of people forgot that we were having the same situations at our homes and we did our best to forget about them while we were supporting others. Not long after what happened, people started to flee the island in search for help, opportunities or to stay with relatives after they lost everything.

After time asking myself if I still had a bf (haha) I managed to call a mutual friend. I didn’t have internet until recently so I could only txt my s/o through mutual friends who became our personal messengers (thanks to my Sis and Sean) or after I became a master of borrowing Wi-Fi. Turns out he was searching for news on social media and even messaged people to get news of my residence area (best bf ever!) 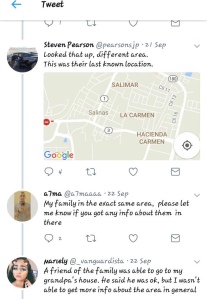 I received a lot of support messages on social networks from friends, acquaintances and even a phone call from a dispatcher to verify my well-being. Turned out a friend from another country opened a case for me and my family after not being able to contact me.

A few months have gone by. There is a sense of normalcy in some places. You drive around, work, go to the mall, buy a few things… as the saying goes, life goes on. Still, you see reminders everywhere: the blue tarps on rooftops, vegetation and debris on the side of the roads, towns with 0% electricity, people charging their electronic devices in the mall. For now, this is the new normal.