Recently, an old friend approached me to ask about my opinion/advice about a situation he is in regarding his love interest. He wanted to express himself anonymously ( reason why he asked me to write this) in hopes to finally reach a decision and feel some peace in his heart. This is what he had to say:

” Many people ask the reason why, well, I can only tell by my experience because a woman loved me in a special way. Like no woman ever loved me before. She loved me in such a way, that I told her I couldn’t offer her material things and she said to me don’t worry, I fell in love with you because of the way you are, how you treat me and the way you treat other people. Well, you can say it’s easy and go for it! But no, the truth is that it’s very difficult. You must be asking Why? Simple: it’s an impossible love. Why? It’s a love so pure, so beautiful. It doesn’t seem real. The impossible part is because she is married and has kids. But not only that…her husband’s family feels a great affection towards me. Her life with him hasn’t been easy. You will understand the dilemma. Do you think is right to take away the woman he already has? Would I be a scoundrel? That’s the reason why I pushed her away from my life. I made up excuses to push her away but, why I think about  her more with each passing day? Should I wait for fate to work in my favor? Keep looking for love? In some other eyes, some other gaze. Someone who is like her, if that even exist. I can’t seem to forget about her; we met and we hugged each other tighter than before. She looks beautiful to me even when disheveled. I haven’t forgotten about her! I wish I could try to build a new life. Could I? Who knows… Does she knows? Do I know? Perhaps God knows? “

While my friend here is facing a true dilemma, someone close to me told me recently that we couldn’t control love. I think the heart has reasons that the reason doesn’t understand. I talked to my friend a couple of days ago. He assured me he was finally letting go of her and forgetting about her. Funny that he says that, he talks to me about her almost every day. 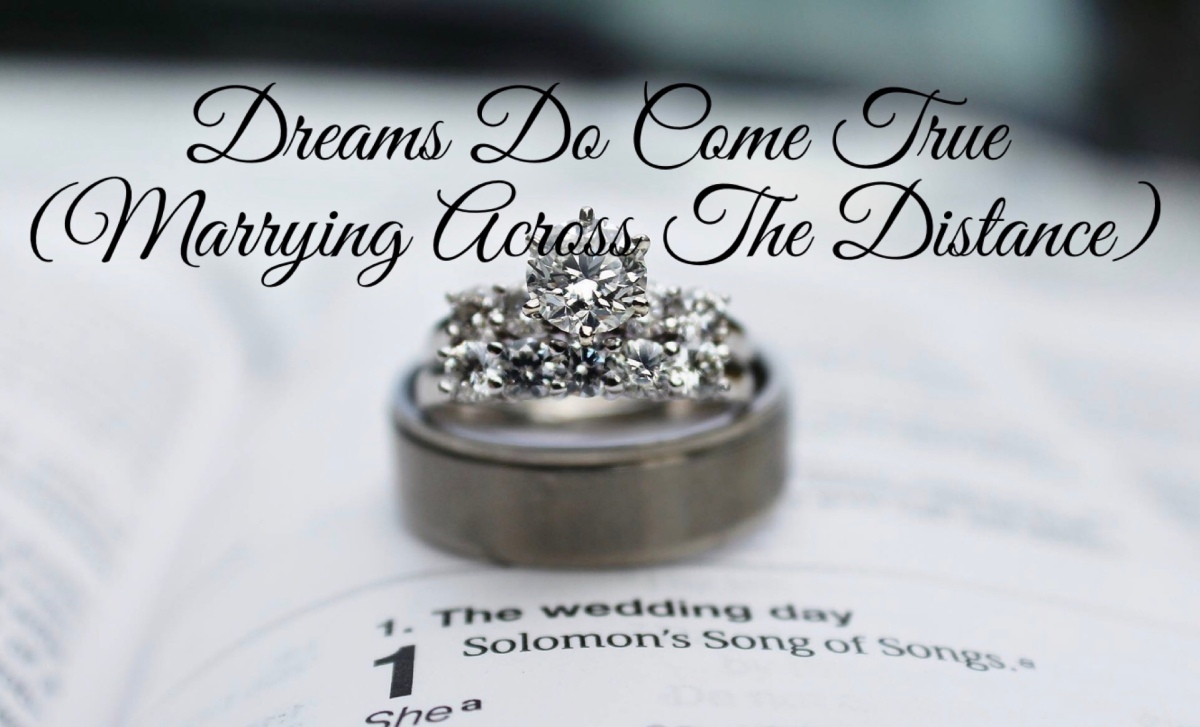 Most fairy tales start with a damsel in distress and the knight in shining armor that comes to her rescue. This isn’t one of those stories. This story starts with my Sis, a warrior princess and her valiant prince who were not afraid to fight the war for love.

Their story is one filled with sacrifices, lost internet connections, sleepless nights because of time difference and of course, the most difficult trial of all, distance. Armed with patience, courage and determination and using love as their most valuable weapon and shield, I am proud to say that my Sis and her prince conquered the first battle: Marriage.

You see, my sister, the warrior princess is from the US and her boyfriend, the valiant prince is from Pakistan. They met online and had a long distance relationship for several years. All their sacrifices finally paid off when they were able to get all the paperwork done to marry in a third country on April 9th. I won’t lie here. It took time, planning and lots of money. This isn’t a battle for the faint of heart or the faithless, but what I want to do is to give others a little idea – using their experiences as reference – so they can know what to expect and how to prepare.

This are some of the documents needed:

Keep in mind that these are only some of the documents required. The documents needed will depend mostly on the country you are getting married. Some countries will required your paperwork to be translated to some other language (English for example) and for them to be apostilled if the country is a member of the Hague Convention (Apostille Convention). That specific procedure allows your document to be certified for legal purposes internationally.  Remember that there are other steps and fees that you may need to take/pay in the country. Always do your research by yourself or with the help of a professional, for example, a lawyer.

Those are key pieces of information that will help you in your journey for love, in your way to marriage and in the battle against distance. When we are in love we think we are an army of two. Sometimes it might even feel like it. Know you are not alone. There are others like my Sis who won the battle. Her story doesn’t end here. The warrior princess and her prince valiant are getting ready for their next battle together. Now they have to plan their next adventure and build their kingdom together. I can’t say “And they lived happily ever after”… at least not yet. But what I can say to you is this: The future may have many names… but for that person, the name is yours.

As many people know, April 2 is the World Autism Awareness Day. It was established in 2007 and it encourages Member States of the UN to raise awareness of the condition.

Though it is believed that the concept of Light It Up Blue was created by the Canadian Autism Society, there is one organization that promotes the event every year in the U.S.

This year, like every other year before (my son was Dx on 2008) I try hard to raise awareness by wearing blue, handing out information about the condition, sharing on social media and even getting my blue light bulb. The picture here shows the actual light bulb (party light) I bought from a hardware store. It’s not the one sold with the logo of the organization, is a simple party light that comes in a white package sold in any hardware store.  The only difference was that this year, I received a message on my Tumblr account asking me not to participate because the organization that promotes the event was “bad”and not really compromised with helping the families of those with autism. It prompted me to search the internet using the term “bad”along with the name of the organization. I have to say that I did. I have to say that there are countless people who do not support the organization because of how they spend the money – research on how to cure autism instead of accepting it, overpaying board members, using little of the funds to help families and those with the condition- to name a few.

After reading (and replying to the message) I had to ask myself why I decided to LIUB on World Autism Awareness Day. Was it to promote an event? To support an organization? the answer was simple… I don’t support organizations, I support my son.

It has been a long journey for us. Before your son gets a diagnose, the road is hard. Getting a diagnose is like re fueling your tank to keep on going. I’ve been on this road long enough to say that it is my duty as a parent to raise awareness and educate those around me so my son and  many other children don’t have to go through the pain of people staring, talking, and asking why is he/she is like that? So the parents (like me) don’t have to wrestle a school system plagued with incompetence, full of unqualified teachers that doesn’t want to help children (not all of them are like this but believe me, you will get more than a few).

In the years that I’ve been on this road (my son is 14 now) I had to learn how to be a psychologist, nurse, occupational therapist,  advocate, but above all… a mother of a special kid. It is my job as a mother to give my son the tools he needs for a brighter future. A future I’m sure no organization will give him, but I will. That includes the decision of giving him a better education in a school that I can’t even afford.

Will I light it up blue next year? Yes I will. Not because of any organization but because we have to raise awareness so our children can have a better, more inclusive environment. Not for a cure, but for better opportunities in a future. Not because someone asks us to do it, but because we choose to participate in their idea for our cause, for our journey.